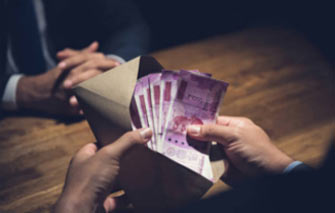 My reaction to the first bribe offered!

I lost my cool!

Yes, can you imagine I was offered a bribe as young as 24-25? I was a sales engineer then at Indian Oxygen or British Oxygen in Vizag. In those days, the company used to produce very premium products and there were a lot of traders who wished to become the distributors of these products. Indeed, it was a lucrative proposition!

One day a local who was a distributor of welding electrodes, and operated in the Rajamundhri area came to my boss Balagopalan’s office. Since my boss was busy in a meeting, he asked me to take him out for lunch. I was happy to do so and we had lunch at a premiere sea-side hotel cum restaurant. After lunch I offered to give him a lift back home, but he said he already has his car. He also added that there was a small gift for me, rather as a token of appreciation for the lunch, inside his car and I should take it. He himself was standing infront of my car and asked me to open the door of his car and take the gift.

Little knowing what was awaiting, I opened the car door and found on the back seat a briefcase. I was a bit surprised as I could not imagine that someone would gift you a briefcase. I was about to shut the door when he said: ‘Why don’t you open the briefcase.’ A bit surprised, I did so and just stood dazed for a couple of seconds. Right infront of me inside that briefcase were bundles of currency notes — yes what we call bribe! It took just a few seconds to register what those notes meant and I was so furious at this attempt to bribe me to get his distributorship, that literally I shouted at him and said: ‘Who the hell do you think you are and who am I?’ I was shocked, spell bound, a thousand of emotions crossing my mind!

But he stood there nonchalant and very coolly asked me to shut the briefcase and cool down. Then he left the spot in his car without even looking back. I was still so angry that I returned and washed my face and then went to boss Balagopalan’s office to tell him what happened. He too laughed and said the man could have employed better ways to do what he was trying to do. He also asked me to calm down.

This episode made me realise that a youngster, a fresher in his job should be prepared to face any situation whatsoever. I could have handled this episode of bribery in a more matured way instead of showing my shock infront of the man and shouting. You have to have your bandwidth as to where to stop and do it accordingly. That was my first lesson on the corrupt world of bribery! And in my own style, I did extract a learning from that too.