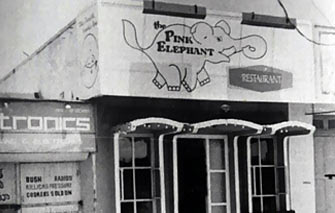 Pink Elephant – the name that sounds a bell

Pink Elephant – the very name that attracted me with a chubby elephant as their mascot, and I got curious to explore it during my bachelor days in Vizag. That was also a time when I used to explore various restaurants of the city on my bike, trying to fit into dinners that would be simple and not create tummy problems. The name Pink Elephant Bar & Restaurant tickled my imagination and I decided to give it a shot.

Incidentally, I used to suffer from prolonged bouts of amoebiosis as I was eating out regularly. Hence, I needed a place that would serve me home-made styled food. Pink Elephant somehow was a huge relief in helping me out in those days and it was also a place where one of my most enduring friendships would start which I would carry forward in my later life. The interiors of Pink Elephant were quite hep and happening, in those days what I would call ‘chic.’ It was red all over, the tables were round — topped with tastefully patterned red Formica laminate instead of the regular rectangular tables that I usually found in other joints. The chairs too were upholstered in matching red fabric with soft cushions. The bar was at one end and had high stools with a young man apparently managing the till.

The day I first landed up at Pink Elephant, I had ordered for a beer and as I sat with the snacks, a matchbox on the table attracted my attention. Over it was written: ‘Where incredible friendships begin.’ Well, that was a big starter for me, I realized the owner had put his head and not just money in sprucing up the place. It was simple low-cost marketing, but with a difference. And in those days, we hardly had this café culture where each boutique café comes up with new trends.

As I sat with the beer, I saw a head at times peeping through the kitchen and waving at others. I somehow realized he must be the owner and soon the man came to my desk and with a welcoming hand introduced himself as Sohan Hatangadi. Our handshake right then led to bonding of two strangers that would go a long way to a full-fledged friendship.

The Pink Elephant was Sohan’s first and solo jump into entrepreneurship and in the early hours of the day he helped his businessman father with his refrigeration business. But his heart, soul and hard work no doubt lay in turning Pink Elephant into a successful joint. I definitely congratulated him for the out-of-box ideas like the one on the matchbox. Pink Elephant not only later saved me from bouts of tummy troubles by serving me home-made food as and when I needed, but also gave me an exposure to early attempts at innovative marketing and branding techniques. I subconsciously imbibed all that would later help me in my own entrepreneurial journey.